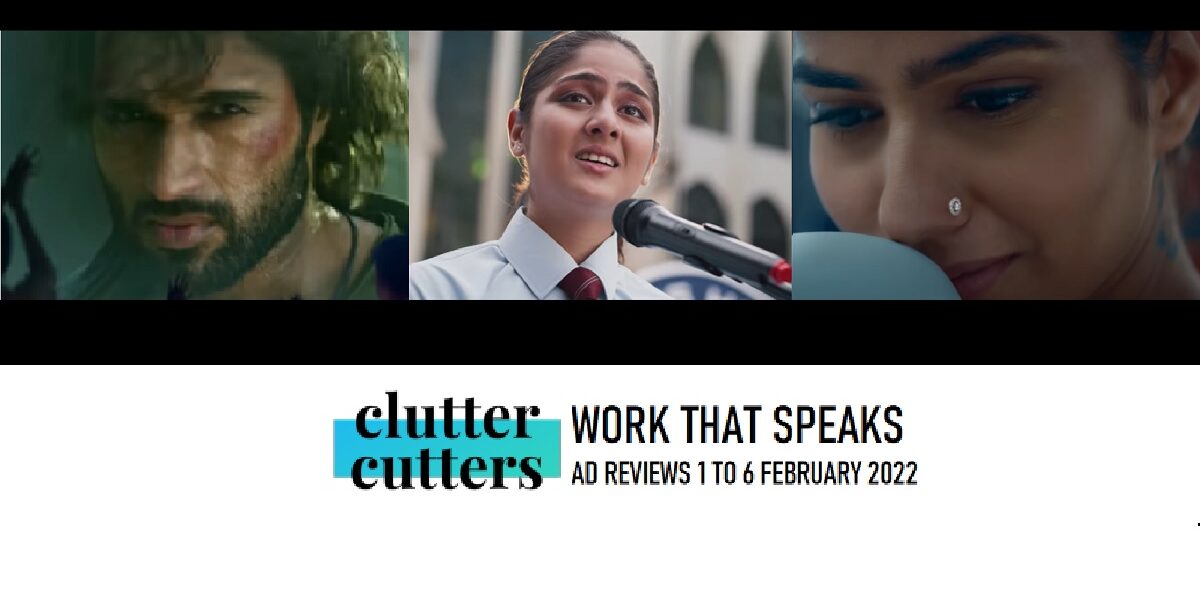 It would be a terrible understatement to say that one can relate to this. With those of us who have pulled through the three waves of Covid19 and attendant financial, social and familial challenges, this should resonate loudly and empathetically. Students who have finished school in the last two years are indeed a special lot. There are no words to express what they – and some of their parents – have been through. As the protagonist fights back tears, there will be a few viewers who can’t stop themselves from breaking down. And the product integrates beautifully with the story.

This ode to women is incredibly smartly done, by celebrating them as shining diamonds – which also happens to be the category being promoted. The film is as elegant as a diamond jewellery spot should be but also deeply humanised. The situations salute the rise of the women protagonists. The diamonds are beautiful, too.

A fresh set of films for ‘Barabar Breaking’ hits the screens and tickles the funny bones. Retains the irreverent flavour of the earlier, ‘irresistible’ Crispello work. Helps the brand cement its place in that space.

If ‘Toofan’ with Bumrah worked, with this Telugu film star it makes a thundering breakthrough. However different the approaches may be, there is no disconnect with the overall theme.

Cadbury Dairy Milk owns the refrigerator with this set of films. I’m not sure if that was the intent, but the series seems to urge folks of all ages to make space for the ‘meetha’ in their refrigerators. The visualisation (from behind the fridge) is fresh. The stories seem to be told through the durable’s POV. And while the stories themselves are simple, the performances make them delightful.

This is a simple way to remind people on the threshold of tying the knot the importance of financial security and hence insurance. But it does a little more than that. It also packs in the layer of keeping one’s promises to the family without compromising on one’s own dreams. Neatly done.

We have seen endless mean machines conquering the most rugged of terrains time and again. The challenge then is to keep the viewer hooked and entertained while also showcasing the machine. The soundtrack – reimagined for more gender-neutral times – kicks things off in the right direction. The lady at the wheel and the contest of sorts between the drivers adds to the interest. If the proposal was a bit of a let down, the pheras of lava keep things in the ‘extraordinary’ domain. All said and done, the work helps Thar stand tall amidst the clutter by many a mile.

When it comes to savings, ELSS is the right – and easy – choice. That message has been built over the layer of how confusing it can be to choose the honeymoon destination with all and sundry offering suggestions. The lighthearted treatment sets viewers up well to hear a message one has heard several times over.

Comes from the same school as the commercial above. You wouldn’t settle for a shirt that’s two sizes less, so why settle for insurance that’s inadequate? To the point, makes the point.

Funny plot that underlines that one will fall in love to the point of obsession with paneer dishes, thanks to Suhana’s paneer masala range. Over-the-top approach keeps it interesting.

‘Haathi Pe Bharosa’ is a wonderful pitch, aligned nicely with and building on the brand identity. Getting Big B to make the pitch makes a lot of sense, because the category demands trust – at least that’s what the film seeks to build. The chess board route seems like it was created to bring in the haathi but it does seem to work.

Despite there being no great idea here and only a protagonist who speaks to the camera (with his kid doing yoga alongside), how does this manage to hold our attention? The film actually hooks you with the pesky insurance pitches via messages and calls right at the beginning. It’s something we can naturally relate to. He goes on to spell out what else is wrong with insurance companies before pitching the brand as the solution. For something made on a visibly frugal budget, this is exceptional RoI work.