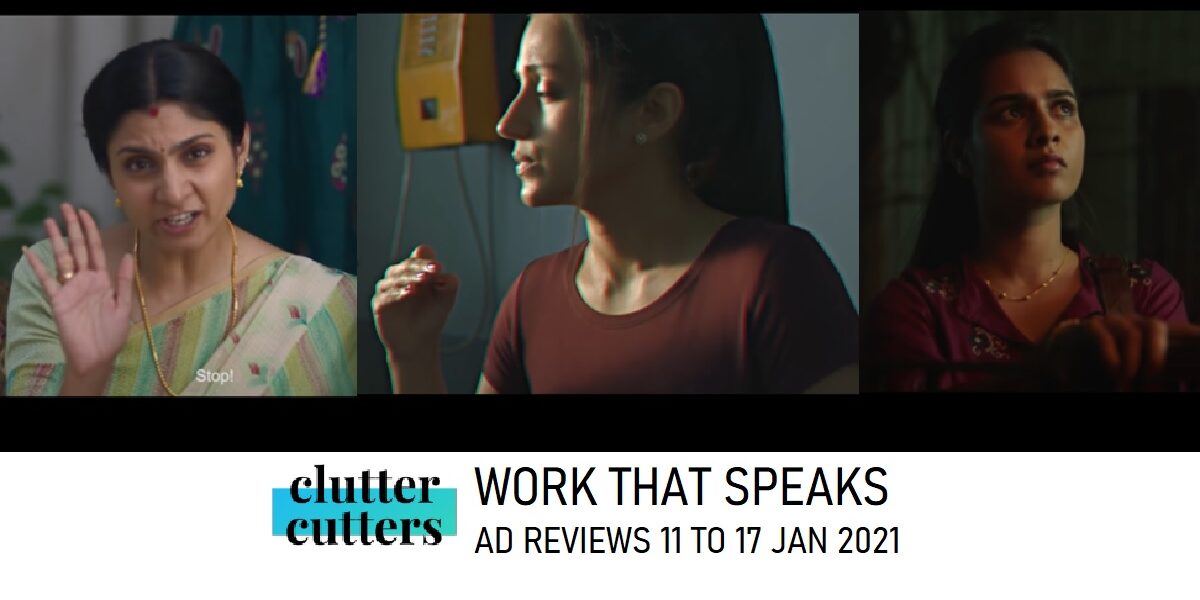 Jos Alukkas | Shine On, Girl
“Model? Waste of time.” That’s how this leading actor across South film industries, Trisha Krishnan, is dismissed early on in her career (according to this spot). Krishnan has been the face of the brand for a few years now but this film is not just about her rise to stardom. As the teaser promises, this is also the story of many ‘Everyday stars’. The message is that others shouldn’t be telling women what they should be doing – and that they should decide for themselves. All the protagonists here do just that, including the film star. Krishnan’s story is one of several that add up to make the point emphatically. Jos Alukkas shines on with this piece of work.

Another signature Cadbury Dairy Milk ‘Kiss Me’ spot. But this one literally packs some magic into the customary playful exchange between the young boy and girl. Keeps it interesting, delivers the ‘scoop’.

With work going virtual, the issue of harassment at work could well follow. Pressure to keep one’s job is real in several industries and as we all know, it could be the trigger for predatory superiors. This spot from the NGO working on gender issues captures this challenge of today’s work reality and the attendant pain of vulnerable employees. It also manages to end on a positive note, staying true to its campaign line of #ChangeForPositive.

One might have dismissed this as an opportunistic moment in marketing but for the fact that the brand has championed #ItTakes2 in the past. Staying the course, Pampers uses its right to the space to good effect, offering some timely advice from other dads to the new celebrity dad Virat Kohli.

Honey brands were in the news for all the wrong reasons and here’s a case of a brand using content to make its point on purity. In this well-executed film, the brand tells the story of those on the honey trail in the beautiful but dangerous Sunderban forest. As a part of the honeycomb falls into the casket of the collector, so does a drop of honey into a tea cup. That visual device using the magic of film allows the brand to make its claim of purity, smoothly.

A stress ball, a vase and a pillow speak volumes of what they go through, thanks to their masters with mental health issues. A largely unaddressed theme gets the spotlight here in a manner that doesn’t stifle conversations on it further. On the contrary, the brand manages to spell out the symptoms without adding to the stigma. It also manages to clearly state that its health insurance plan also covers mental health.

Another topic that is all hushed up is contraception and here’s a brand that’s trying to open up the category. It manages to deliver the message of ‘Plan your pregnancy’ with a #ShhNotOkPlease song and dance, because a sermon wouldn’t have worked. In a country where people expect a couple getting married to deliver (a baby) in a year or less, it’s time to say it’s not okay.

A new category is opening up and one that most will relate to. When the product proposition is clear, it helps craft the communication with clarity. Rather than go the “hygiene-plus-odour removal” route, the brand has smartly picked the bad odour approach. The hygiene element is pitched as an added benefit in the context of public restrooms. Rather than play in an overcrowded hygiene space, it makes sense to address the universal #ShitSmellsBad problem with a #NotAnymore promise.

Bhogi, the day preceding the main Pongal festival, is a day when the old is symbolically discarded (traditionally, burnt) and one ushers in the new. It is also a day when the traditional drums (melam) is played. Cars24 has attempted to ride this, to ask people if it’s time to get rid of their old car. It’s nice to see national brands pay attention to regional festivals and the nuances therein. There’s a lot, lot more that can be done in this direction, across India.