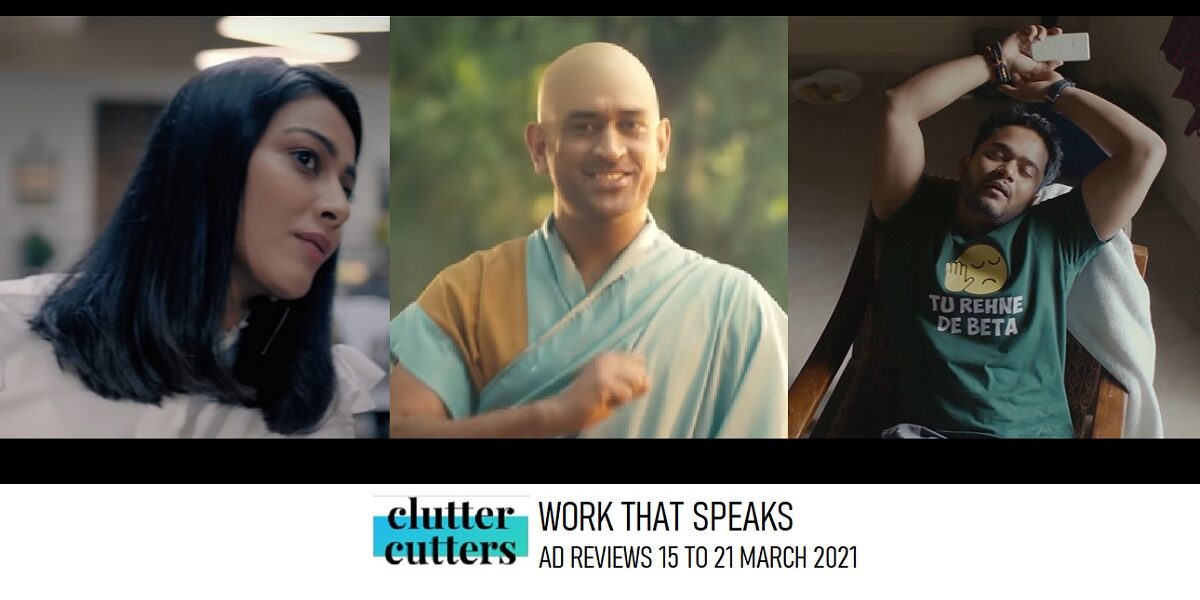 In my book, this should be a contender for ‘Best use of celebrity’. Celebrities playing themselves, especially in the sports context, has reached a point of predictable boredom. Dhoni performs admirably here in multiple roles. His character in the launch spot seems inspired by his Captain Cool persona.

On the idea front too, this campaign does more than ticks the box. The approach is fresh and the net result is a series of winsome promos for the forthcoming IPL.

How did we miss this gem that the brand came up with for Women’s Day 2021? The core thought of ‘Making time for yourself makes you better at everything you do’ could apply to any subordinate, or for that matter, anyone. This piece of work smartly makes us view the situation from the gender lens by making a female subordinate the protagonist. It’s her turn to put her foot down for her time.

The brand is giving us multiple reasons through this series of films to stay with OYO. Whether you want an extended stay or your own space or personalised care, OYO makes it possible, is the promise. One has to appreciate the choice of plots and equally the effort that has gone into bringing them to life on screen. There has also been a conscious effort at addressing diversity through the characterisation.

I wonder if there could be a better soundtrack to augment a spot that sets out to highlight night photography on the phone. The visuals captured ensure that the vibrant pulse and the calm of the night extend from the song to the screen. The message of ‘Light up the night’ would be unmissable, even if it had not been the sign off.

The series makes me wonder if they were written for the Bollywood duo featured, or if they wrote it themselves. The spots are an extension of Karan Johar and Twinkle Khanna and their enjoyable banter leads us to Cliq without too much of an effort.

So 80 pc of Indians have Vitamin D deficiency. This must rank as one of the more interesting ways to bring that fact to attention and urge people to boost their immunity (with Vitamin D). The creative hook of all Indians being the same works wonders.

We saw the same theme play out during the FIFA World Cup in Moscow. It now makes a return for UEFA EURO with a good dose of humour. The premise worked for the World Cup and it holds for the European tourney too. Two of the spots also target the traditionally football-loving Bengali and Malayali audiences.

Spotify | Podcasts | Make The Most Of Your Time

This is a smart, entertaining series of short spots that spell out the offerings clearly. That one can do a lot more with their time listening to podcasts during one’s morning walk. Or listen to astrology predictions. Or simply indulge in nostalgia, and the like. There’s something for everyone.

One solution for several skin problems. How do you communicate that interestingly? This answer scores very high on that question.

Some brands continue to make otherwise boring propositions watchable and interesting and this is a good example. It’s a ‘budget wala paint’. A story about a man and his wife going to the housewarming party of his subordinate unfolds, They decide on Rs.100 as the gift money. But that changes once the wife sees the impressive painting, which is later revealed as economical. Who says creativity is dead?

So the setting is familiar and so is the star. But the offering is Mountain Dew ‘Ice’. Enter ‘Jeetne Ki Aag Aur Thanda Dimag’ and some daredevilry, pictured as excellently as ever. Breaks the ice for the new product offering.

Strategically sound approach to mainlining Esports, by underlining their rising stature at international sporting competitions. Who better to do it with than sports stars who have won the nation glory?

A phone with a powerful battery, that goes all night and all day in the hands of the female protagonist. Cute and light storytelling without taking anything away from the messaging. Aslo stands out because it is the girl wooing the boyfriend and staying up all night outside his house to make up.

Good use of loud humour here to raise the pitch around the upcoming IPL. The series is unlikely to win any awards, but it will get noticed.

I can’t recall seeing mattresses being portrayed by people before. The approach seems new. The benefits are spelt out clearly with the use of humour. I am assuming shorter edits of the films (each of them is over a minute long) will work better.