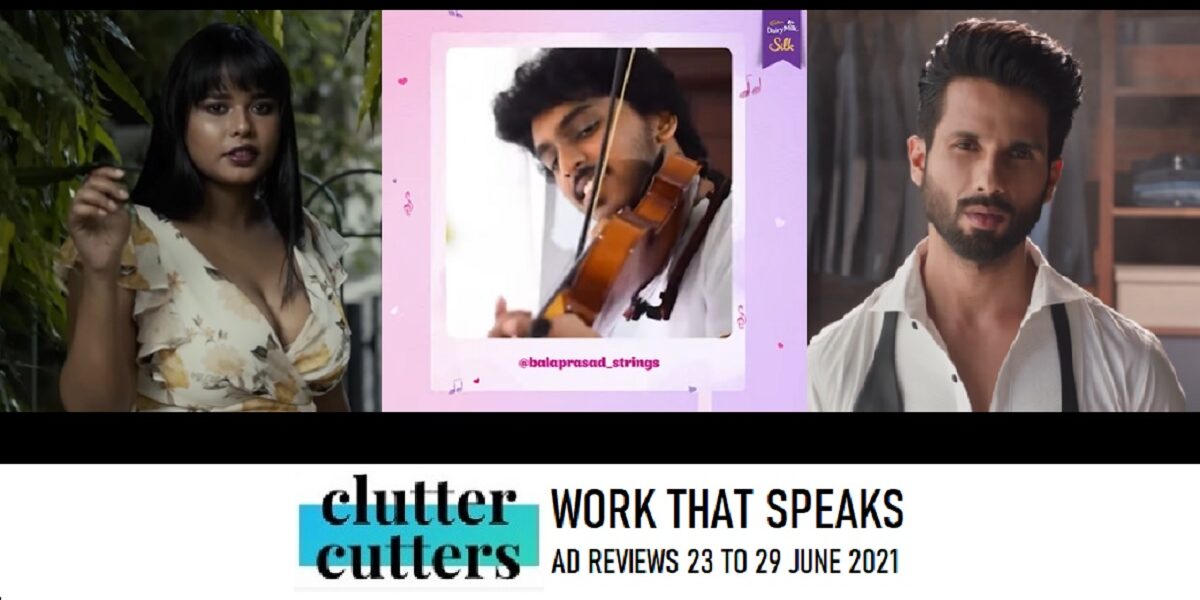 This ongoing series from Nykaa continues to stand out with true stories that strike a chord. In the last couple of films in the content series, a plus-sized Sabyasachi model and a photographer and activist are in the limelight. While the theme may have been explored by other brands before, what works here is threefold: choice of stories, consistency (and continuity) and authentic storytelling. All essentials for content from a brand that wants to own a space.

Here’s an initiative that makes you wonder why this hadn’t happened before. Surely, much like the soundtracks of Titan Watches and Raymond, Cadbury’s ‘Miss Me’ must rank up there among the most-loved in commercials. Here’s a short adapt of the same for World Music Day that leaves us hoping that there is more to come.

According to the spot, only two of five parents said they’d be supportive of their child if s/he was part of the LGBT+ community. Perhaps fewer still would actually be fully supportive in that situation. Sharing the ‘Pride’ label is different from accepting a loved one who is part of the community. This harsh reality is told quite simply and sensitively here through a father-son story.

That deodorants are not magnets that attract the opposite gender has been said before. And it’s been said using celebrities too. Brut says it articulately and memorably here with Shahid Kapoor now, with the statement: ‘Smells Good – Lasts Long – That’s it. There’s a finality of the ‘Fill it – Shut it – Forget it’ variety that makes this emphatic and confident.

Tanishq | A Salute To Our Doctors

The plot of the little girl playing ‘mask police’ is adorable. Why she does it is endearing – less ill people means that her doctor-mother can come home everyday. The brand finds a window when the mother puts her necklace around her daughter’s neck. Through it, she’ll be with her little one forever.

Nestle Nangrow | All Growth. All Possibilities.

This is a category that’s growing beyond product ingredients and attendant benefits. Nangrow points to ‘possibilities’ and the need to have all of them covered, before pitching the good stuff in the beverage. The mother (to look up to) leaves nothing to chance and the plot makes for interesting viewing.

‘The mystery of the missing masala’ is revealed by brand ambassador Kohli towards the end of this spot, after a filmy-style search at multiple locations by cops in khaki. The plot remains interesting until that point and full credit goes to the makers for that.

This is a warm ode to the local stores and captures the charm of doing business with them. The little things that make up these experiences are strung in line here to tug at the heartstrings.

Another little lesson in keeping things interesting unfolds here with a product-led antakshari. Doesn’t seem all that impressive as an idea when you see it on paper. Yet somehow, they’ve managed to make it work.

When you’re going to take a dig at competition, this is one approach to make sure the effort gets noticed. KyaTrade mimics the Upstox work all the way up the escalator and then some, adding some drama for after-effects as well. The core point of differentiation too does not go unnoticed. The difference is around the approach to stock market investing. While one said it’s cakewalk, the other now says it’s not and needs expert advice (which it provides). The makers seem to have indulged themselves with the amusing endings.

The spots in three South Indian languages show several elements of a wedding getting captured on Canon, which holds the promise of ‘Delighting you always’. A wedding and the scenic ambience do allow for some great pictures. There’s a pivotal theme, which is not all that frequent in the category.