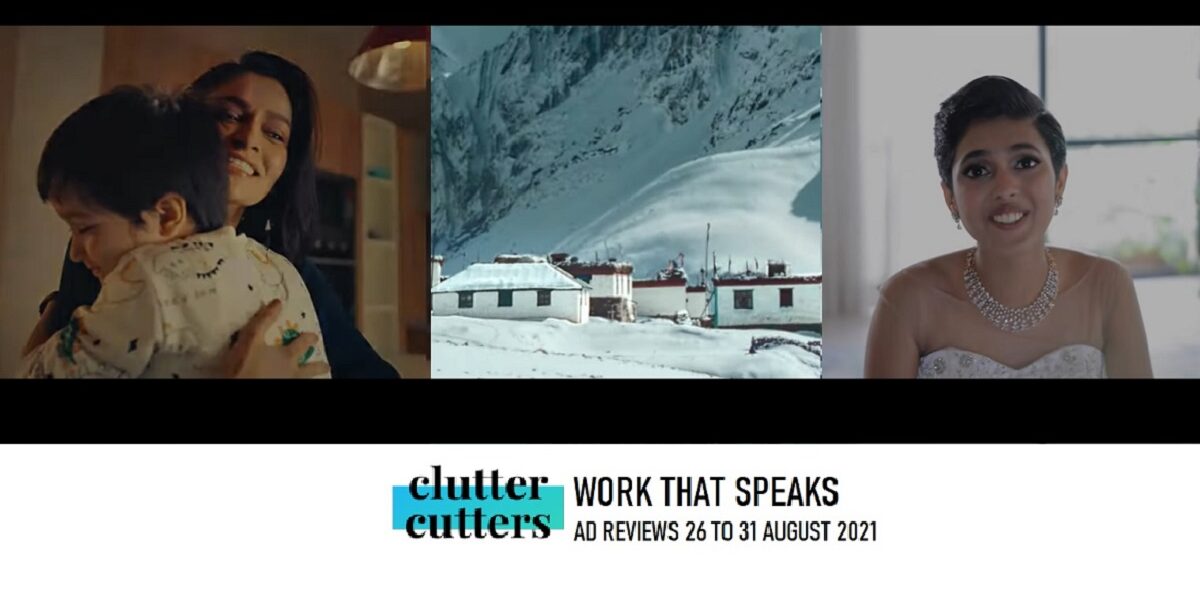 The last column of the month tends to carry a few more campaigns, packing as it does all that was missed during the month. The intent is that nothing that deserves to be featured should be missed out on. Even if they are, we will carry them in subsequent weeks. Do mail them to Campaigns@ClutterCutters.in.

A vibrant 2021 edition of ‘Brides of India’ that the brand has created over the years hit us earlier this month. This video captures how a young woman, who happens to be quite unwell, reached out to the brand after seeing the video, wondering if she too could be part of a shoot wearing some of the jewellery on show. The brand complied, and this is how things unfolded. The spunk of the original video finds a match in the heart of this unscripted ‘sequel’. Could it have been written better or shorter? It would be a crime to dissect this heartwarming gesture.

The brand started this series in Kerala and told us that the panels are used to make anything from houseboats in Kerala to the cabinets in your home.

This edition articulates the promise as ‘One board, infinite uses’ by capturing the sights and sounds of Ladakh. From shelters in the snow capped mountaintops of Ladakh, to the false ceilings in your office, it is evident that the Bison Panel indeed has many uses. From houseboats to shelters in Ladakh, the choices also imply the robust quality of the panels. It is heartening to see the series continue without lowering the bar, even if the element of surprise that followed the boat ride in the first film is missing. That said, one wonders what the next location is and hopes to see the next edition soon. This is too good an idea to stop here.

This adorable ode to mothers celebrates their obsession when it comes to their kids sans compromise. The different facets of that obsession captured here make for not just an engaging watch but also an emotional one.

It’s called ‘Barni’ in Hindi but the practice of saving money in kitchen jars exists across the country, possibly without a catchy name. This is an excellent analogy to take a dig at what one could call ‘passive’ investments and drive home the returns that mutual funds could offer. The idea hook, calming narration, soothing music and accompanying visuals makes this watchable until the end.

A spoof done well can work wonders and one done badly can make the spoof the subject of ridicule. This one dares to try and spoof an iconic scene from DDLJ and pulls it off rather well. The brand fitment with the chosen scenes is bang on. The execution will put a smile on the viewer’s face.

The story is perfectly aligned with the product proposition. The relatable plot about a rare boss who offers to do his colleague’s job so he can go home on a Friday evening is bound to evoke a few laughs. The key message hits you at a point where you can’t miss it – when one is rather keen to know what’s coming next.

Did OPPO just change the game a bit with this after-sales pitch? I’m not sure if this will start a trend but it well could. When product parity prevails, the post-purchase experience could be a compelling reason for choice. When the cost of ownership in a category is high enough for it to be driven by EMI purchases for a large segment of people, the cost and ease of maintenance do matter. The films make their points loudly and clearly.

Way over the top, but that gets your attention. And the message is clear.

There aren’t as many pieces of work celebrating the contribution of homemakers as there are lauding career women and those straddling career and home. Taking nothing away from ‘working women’, this film rightly gives credit to those working for their home. Though there have been initiatives to put a monetary value to their contribution, I believe it’s priceless and selfless. It’s great to see ‘Ab Samjhauta Nahin’ take this track and address an issue that’s hardly been paid attention to in mainstream advertising.

At the end of the day, literally, the brand is egging you to indulge and bite into a Dark Fantasy like Alia Bhatt does here. A nice balance of personal and professional pain points and their human carriers simply melt away. Excellently visualised and executed to perfection.

Song and dance around a solid theme make this one cut through. The brand uses a familiar star face to drive home ‘Return on Health’ to the accompaniment of some contemporary rap.

Honda Amaze has clearly articulated its premise in the past with work like the one featuring a giant-sized car asking people to make a ‘Big’ switch. This time too it creates some differentiated and noticeable work around ‘Shaan’, shifting from the category codes while doing so.

The commitment of the delivery partners to deliver on time takes centerstage in these two films featuring a Bollywood star each. That it has run into social media criticism is not surprising, given the nature of the category and its challenges in partner engagement. Let’s not forget that it comes soon after another round of social media criticism on a video featuring comedian Danish Sait, who played delivery partner for a day.

Whether it is cab aggregators or food delivery apps, challenges remain and it should be the endeavour of the brand to spell out its intent through its communication. That is what the brand has done here. With social media criticism, you don’t even know where it’s really coming from but yes, you need to listen. The last thing the brand should do is give in and pull out. The argument that the brand needs to pay its delivery partners more instead of paying celebrities could well be followed up by another saying that it should pay partners more instead of spending on advertising. By all means, address the issues – but keep the communication flowing.

Showing the effort that goes behind making each packet of Daawat rice could have been quite a boring exercise. But the brand manages to infuse life into that story from godown to home with star power and a simple script.

It may seem familiar, but it’s catchy and it works. Th execution and casting seem to have done the trick. You can’t miss the ‘Cream biscuit main glucose’ pitch.

Bingo seems to have taken over from the Mentos-Sprite school of smartness and crafts an interesting exchange between brothers. ‘Masti ke time pe No Rulz’ smartly aligns the story with the brand.

This is quite the conversation starter currently in several gatherings – ‘Where to?’ The mood is one of yearning and aching to get out if one hasn’t already. The star couple without the starry airs is one we can relate to. Enlisting destinations where Club Mahindra has a presence through the characters in conversation works like a charm.

I outsourced this in part to someone who grew up on Hindi cinema of the ’90s. One assumes that is the age group the brand is trying to woo. If yes, it seems to have struck gold with the ‘Tareek pe tareek’ dialogue and the star. The root of course is in the pain point that Dunzo promises to eliminate by virtue of not being locked in with one store.